Whisk(e)y Of The Week: What Would You Pay For A Single Malt Distilled In 1962? How About Nothing?

When you've got a Scotch whisky distillery and one of your casks happens to have some 50-plus years old liquid in it, well, you don't need to be told the drill. You bottle that sucker up in a fancy crystal decanter (making sure to call it "bespoke" in the press release), put it in a pretty box that likely has some velvet on the inside, and sell it for approximately the price of a Tesla. And why not? After all, that barrel of whisky has been taking up space in your warehouse for a half-century plus, with countless nosing and tasting sessions over the decades, and the rent is due, baby. What it tastes like doesn't really matter, since most of the bottles will be purchased by collectors and stuck on shelves to gather dust and appreciate in value.

So it's a swell thing that the Craigellachie has decided to chuck the usual script. The Speyside distillery has been around since 1891, although its product was used almost exclusively in blends until 2013, when it finally got to strut its stuff as a single malt. Its use of old-fashioned oil-fired malting kilns and worm tubs (in which no worms are actually used) gives it a unique, meaty flavor with a hint of sulfur that's, well, far better than such a description may sound — the 17 and 23 year old expressions are up there in my pantheon of absolutely tip-top favorite whiskies. The brand isn't just quirky in its distillation methods; for a while it only released expressions aged to a prime number (a number divisible only by 1 and itself). The non-prime 33 year old, which broke the streak, was a tremendous whisky, but it also broke my heart a little. 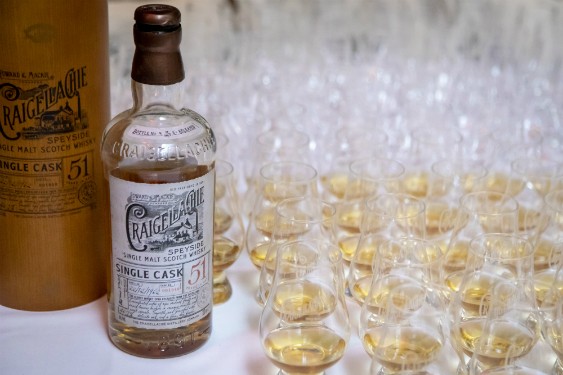 But about that 50-plus year old whisky. Most brands would have seen the barrel — distilled on December 22, 1962 and dumped into stainless steel tanks in 2014 when the proof fell dangerously close to the minimum 40% ABV required by law — and seen dollar signs, or pound signs as the case may be. With only 51 bottles having escaped the angels' clutches, Craigellachie 51 could have sold for, oh, a billion shmillion dollars, or at least something in that neighborhood. But the powers-that-be decided instead to give the damn thing away, no doubt to the frustration of the 1-percenters who regularly bid in the billions and shmillions on rare bottles worldwide.

Now, 51 bottles obviously isn't enough to pour even the tiniest dram for everyone who'll want to try it. So Craigellachie is inviting imbibers to their website to enter for a chance to win a taste, as well as one for a friend, at pop-up bars in various locales throughout the year (the next one is in New York City in May). I have tried it, and while it's still recognizably Craigellachie, with that oddball meaty/sulfuric flavor, light fruitiness, and a lovely, waxy mouthfeel, time has diminished it somewhat, and it lacks the robustness of its younger counterparts. If it cost a year's rent, I'd probably be disappointed. But it's more than worth the effort it takes to enter the drawing, and as a bit of history — when was the last time you tasted a whisky distilled during the Kennedy administration? — it's priceless. You've got until Saturday, April 27th to enter the drawing for the NYC tasting, which will be held on May 7-9, and two more tastings are promised this year. Go for the gusto — what have you got to lose?