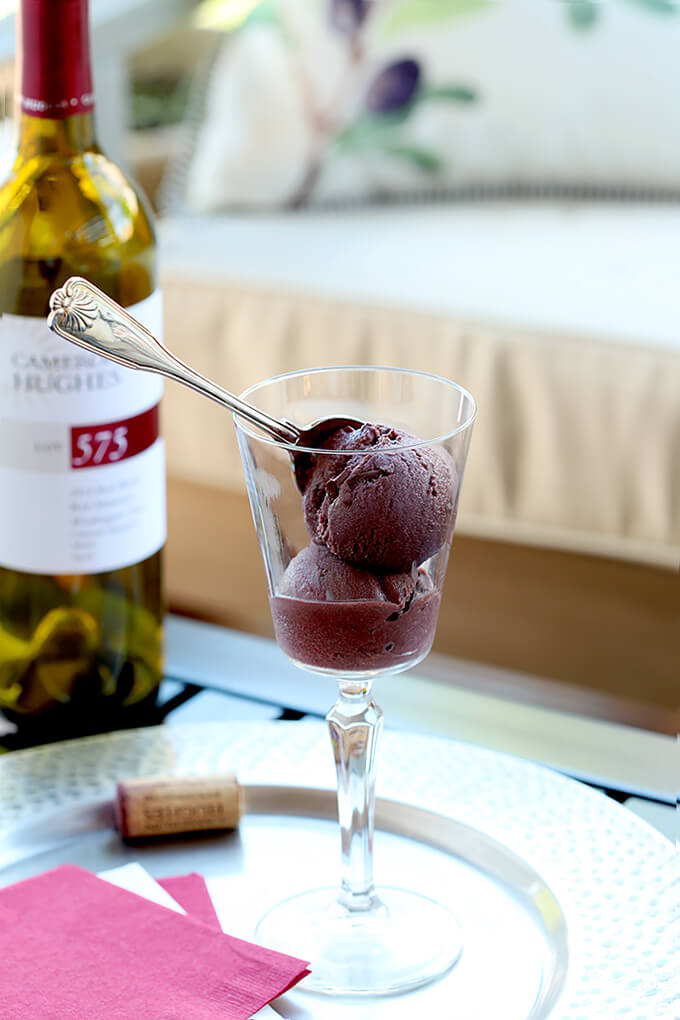 I started this week off with a bang; I didn’t get this recipe completed in time to post with a group that I’m a part of. A group I started so I really feel some extra responsibility. But the good news? We’ve all been there. I simply ran out of time this weekend. Even better news? Everyone in the group was gracious and insisted I not drop out but post a bit later so here I am! We truly are Progressive!

I never seem to have the luxury of playing all weekend; even with a now four year old house, I still think of long weekends as the opportunity to get a project done. This past weekend it was all about the deck I had built this time last year. It was time to stain it and I was the person in charge.

Ah, well, I was also the person doing all the work…doggone I need a team to be in charge of and I could just sit and enjoy this Cabernet Gelato with Chocolate Shards while someone else does the hard labor…what was I thinking?? 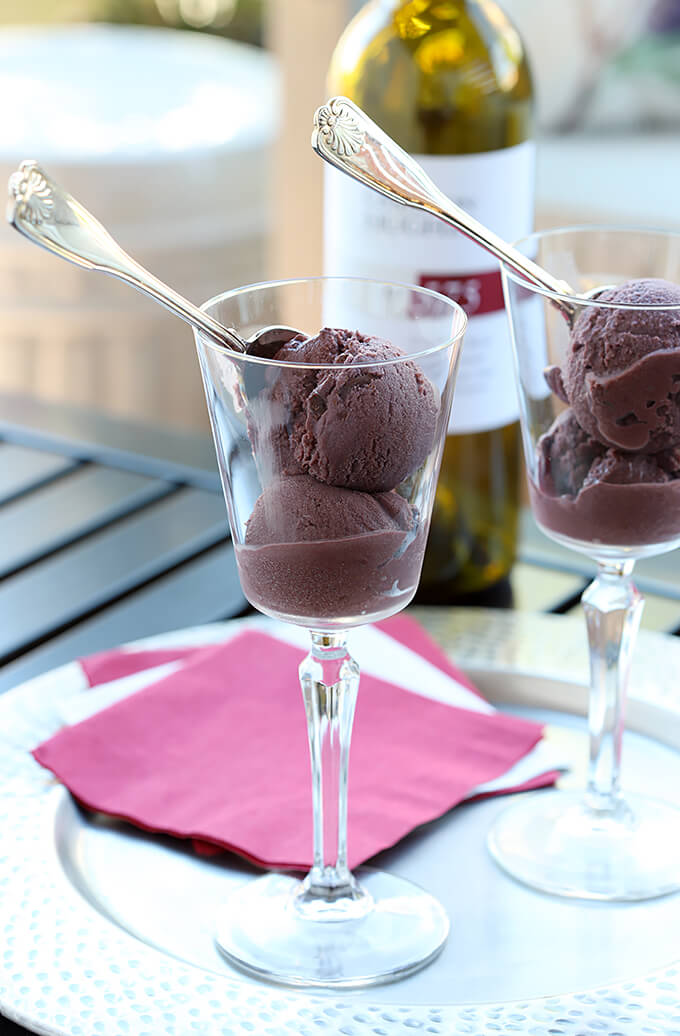 So while I should have been making an icy treat I was prepping the deck with cleaner, staining it, and then after 24 hours of letting it dry, moving all the furniture out of my back yard back onto the deck and arranging it. That’s the part that probably ate up as much time as anything…I’m definitely a re-arranger!

But now it’s done and it’s time to enjoy it so I invited some friends over yesterday to an early barbecue. I slept a bit too late, I forgot I had to treat eight huge couch cushions with Scotchgard and ahem, the part I totally spaced? This gelato is cooked to incorporate some cornstarch into the mix to make sure it thickens nicely. It had to completely cool before I could even think of churning it.

Gelato is not made with heavy cream, it’s normally a combination of milk, bit of half and half and flavorings. Since my third component was going to be wine and I would be eliminating some of the milk, I upped the half and half ratio that I used in this recipe for a Sicilain Chocolate Gelato with Bourbon and Chocolate Chips to balance the creaminess a bit. 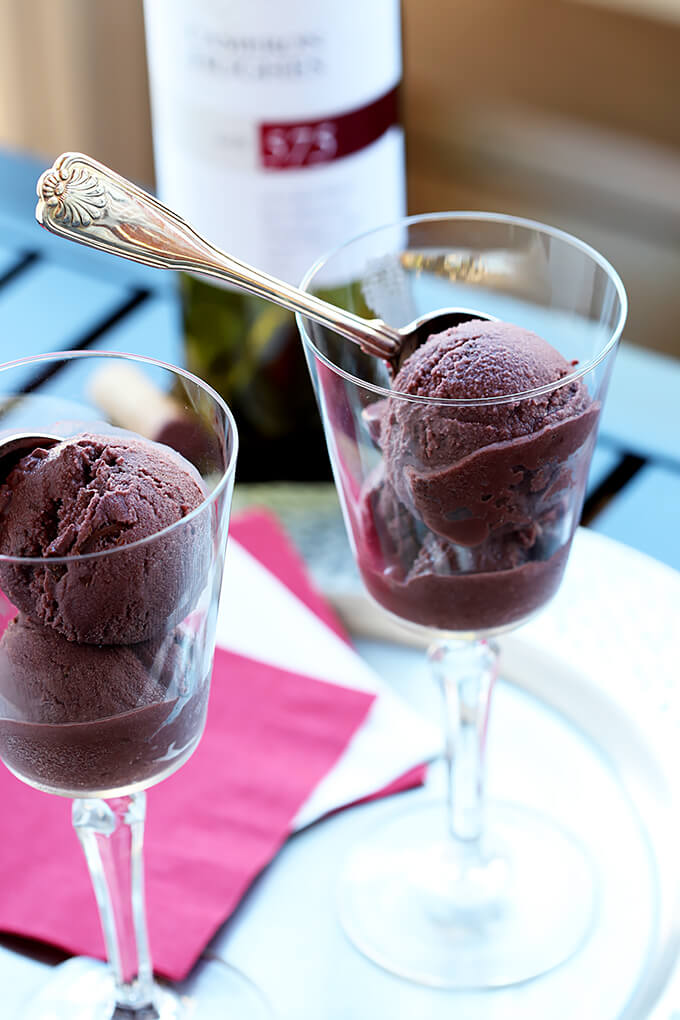 I used a technique when making this gelato called Stracciatella; it’s a big, hard to pronounce word that has multiple meanings but in this case it means that melted chocolate is dripped into the ice cream mixture at the end of the cycle when it is already firmed and moving easily in the machine but not quite ready. The result is heavenly and I prefer it tenfold over the simplicity of adding chocolate chips.

The shards that are created from this technique melt in your mouth, something I honestly don’t think chocolate chips do well. Plus by creating your own chocolate mixture you can vary it significantly. I usually prefer a combination of half semi-sweet chocolate with half milk chocolate but if you’re all dark chocolate all the time; then do that. White chocolate could even be fun in a dark mixture like this one. 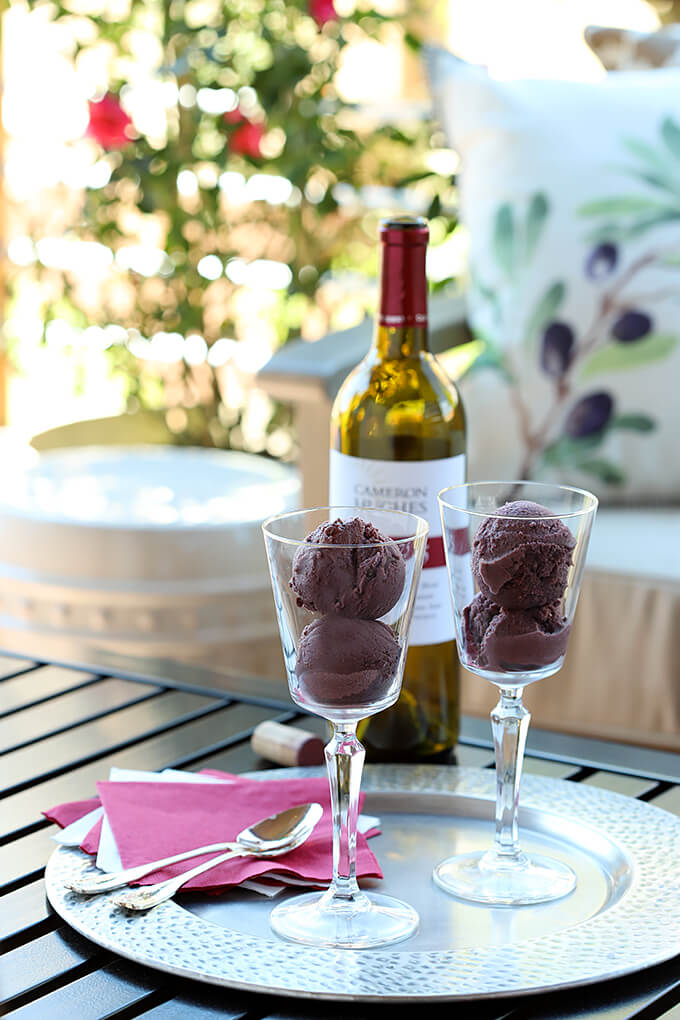 Luckily the one thing I knew would make this easy once I got to it was my ice cream maker. No longer the hour of churning by hand thankfully, this Cuisinart Ice Cream Maker does make the process simple once the ingredients are ready. I think I sold my neighbor who had never seen one; he was still thinking hand crank!

This is not a super sweet ice cream; don’t get me wrong it’s sweet but just enough for an adult palate that lets the wine come through. It’s not a cheap ice cream because I used an entire bottle of wine that I simmered down to one cup, but it will serve more than a bottle of wine would, so next time you have guests, forgo that last after dinner tipple and serve this instead; it’s absolutely worth it!

Welcome to Progressive Eats, our virtual version of a Progressive Dinner Party. Each recipe in our menu this month features Frozen Treats – to welcome the beautiful summer months. Our host this month is Ansh from Spiceroots .

If you’re unfamiliar with the concept, a progressive dinner involves going from house to house, enjoying a different course at each location. With Progressive Eats, a theme is chosen each month, members share recipes suitable for a delicious meal or party, and you can hop from blog to blog to check them out.